Getting Ready for NaNoWriMo 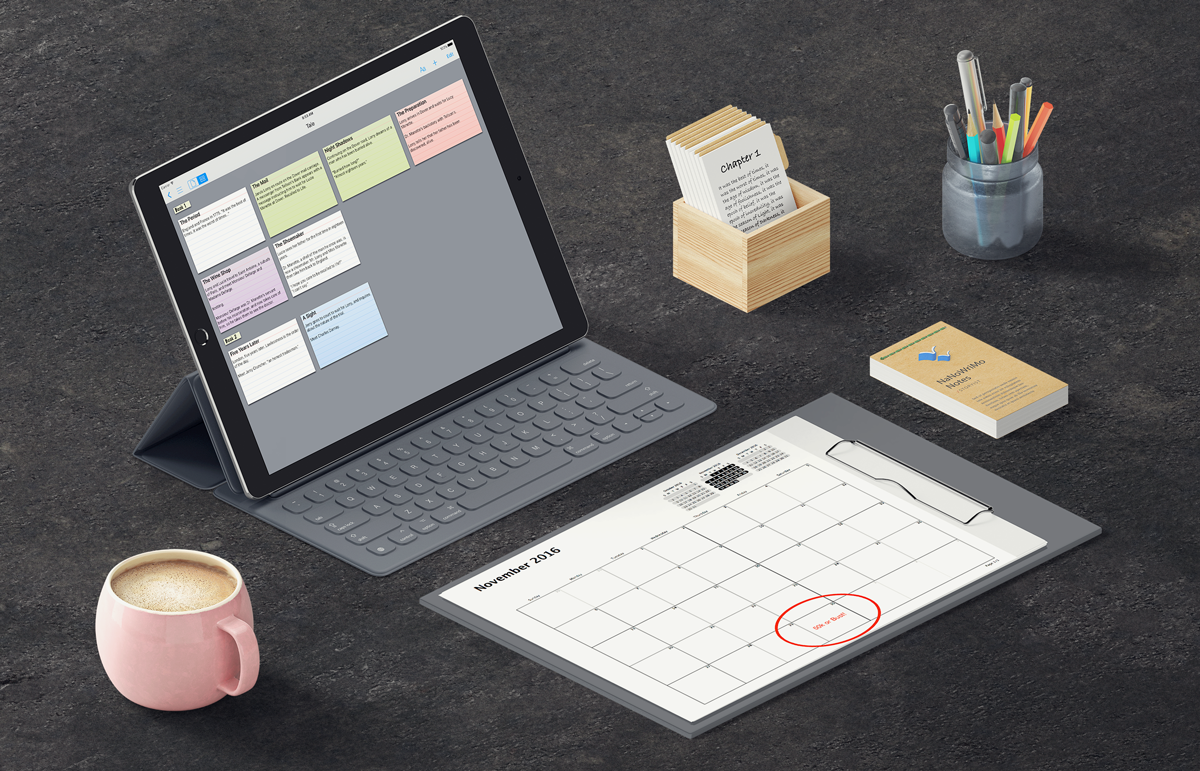 “What are you writing this year?”

It’s the question on everyone’s lips at the regional NaNoWriMo kickoff parties. The answer, even among seasoned NaNoWriMo veterans, is often “I don’t know.” If you don’t know either, relax—you’re in good company.

If you’re looking for ideas, you’ll find plenty of resources to get you going. The NaNoWriMo forums, and Chris Baty’s book No Plot? No Problem! are two of the best.

As this is my tenth year participating in NaNoWriMo, I thought I’d add to the mix with a quick how-to on the techniques that have worked for me.

So what should you write?

I disagree with this “conventional” wisdom. For many writers, part of the joy of writing is in learning something new, and in living in a world of your making. The trick is finding a story idea that captures your imagination.

One of the more effective ways to do this is to play a game of “What If?” Look around you and ask what would happen if something you cared deeply about changed in a significant way. For example:

If you are uncomfortable putting yourself at the center of your story, look around you. Family, friends, and co-workers are great sources for “What Ifs.”

Be forewarned, though; friends and family can be very prickly if you put them in your novel. And while you could use this to your advantage, you’re probably better off disguising their situations so they won’t know it’s them.

If those “what ifs” don’t work for you, you can always turn to the Web. Current news stories make great starting points.

Take fifteen minutes or so and write down as many “What Ifs” as you can. Try to fill a couple of pages.

Tip: Play with a friend. This exercise can be uproariously funny if you give it half a chance.

Tip 2: Be as specific as possible. Use “my boss” instead of “management,” and “James Comey” instead of “the FBI.” Even a vast conspiracy needs a point person through whom the reader can experience the evil. You probably should use a fictional name, however.

Then, sift through the list and find the “What If” that grabs you. If you can’t pick one, take some time to cull the top three, and flip a three-sided coin to identify the winner.

Look at your “What If” question. What is the story is about?

The answer isn’t always obvious. For example, consider the question, “What if I finally found my true love only to discover that she was in love with someone else?”

The story might be about your quest to win her heart, whatever the cost. However, the story could just as easily be about her fight to fend off the stalker that threatens to come between her and her true love.

If the question is “What if Donald Trump developed amnesia?”, the story might be a redemption tale where Trump gradually discovers who he really is and decides to make a fresh start, or it might be a revenge story about the candidate getting what’s coming to him. Or it might be a thriller about the newly elected President suddenly waking up in the White House with his finger on the button.

Once you know who your protagonist and antagonist are and have a general idea of the story line, take a stack of index cards (or use Storyist, which provides virtual index card support), and jot down all the things you can think of that would keep your protagonist from getting what they want.

When I say everything, I mean everything. Go for quantity over quality. Use one card for each idea. And remember this: the more difficult, the more larger-than-life the conflict, the more compelling the story.

Flesh Out Your Main Characters

Now, create two new pages of notes, one for your protagonist and one for your antagonist. For each character, ask yourself:

Write down your answers in your character pages.

Then, ask some of your own. There are a million other questions you could ask. Brainstorm. Search the web. If you’re stuck, try answering the Proust Questionnaire for your character. Don’t worry if the character doesn’t “click” right now. Get some ideas on paper.

Many writers like to assemble a collage of photos of to use for inspiration as they write. If this appeals to you, take a few minutes to surf the Web for images that evoke your character. Google Images is a good place to start.

Now that you have a clearer picture of who your protagonist and antagonist are, it’s time to populate your story world with a cast of interesting characters. Set aside a few hours, find a public place, pack your laptop or pad of paper, and sit and watch.

Coffee shops work well since you can sit for hours and use your laptop without attracting attention. But keep in mind that the clientele at the shop are likely to be a lot like you, so you won’t see as much diversity as you would if you ventured off your beaten path.

Try to find a place that matches your setting. If you’re writing a legal thriller, park yourself outside a law office. Writing a medical drama? Visit a hospital.

Soak it all in. If you do, you’ll have a wealth of character sketches to draw on as you’re writing.

Observe the Group as a Whole

The supporting characters in your story will change significantly from draft to draft.

The quirky nurse in draft one may need to become the perky intern in draft two to tie up a romantic subplot. The co-worker who inadvertently sets the story in motion may need to become a mail room manager to accommodate a change in setting. The important thing at this point is to get a sense of the group, so create a new page of notes to record your general sense of the crowd.

A little secret: What you observe in these outings isn’t actually that important. What is important is that you’re training yourself to observe the world as a writer does. You’ll find yourself doing that a lot in the coming month.

Focus on the Individuals Who Interest You

After you have a good sense of the group, pick a few individuals who interest you and dig deeper. What attracted your attention? Jot down the physical actions and details as quickly as you can.

Then, try to imagine what they are thinking. What problems do they face? What do they want badly? Why are they having trouble getting it?

Now that you have a tentative cast of characters, take out that stack of index cards, and spread them out in front of you. These are the candidates for scenes in your novel.

Arrange them in a sequence that makes sense to you. You can set some of the wackier cards aside, but don’t throw them away—these cards often contain the seeds for your most powerful scenes.

When you’re happy with the order, pick the five cards with the highest conflict. These are candidates for your key scenes.

What are key scenes? These are the dramatic high points that sling the story onward toward its inevitable conclusion. A lot of writing books describe the key scenes roughly as follows:

Usually, it isn’t that simple. The high-conflict scenes you picked from your stack will rarely match the key scenes listed above. So why didn’t I tell you about the “conventional” key scenes first? Because I don’t think you should spend too much time pouring your story into someone else’s mold. Pacing is important in storytelling, though, and you should think about how you’re going to keep the story moving. Use the above descriptions if they help.

So what now? Are you happy with your key scenes? If not, don’t be afraid to reshuffle the cards or start over. The goal here is gradual understanding. If you know more about your story after this first pass than you did before you started, you’ve made progress. Put the cards away for a day and come back to them with a fresh pair of eyes if you need to.

Here are some common problems you might run across in the process.

Now that you have the cast and story line fleshed out, write the blurb that you’d like to see on the back of your book jacket. Why? Three reasons.

How do you write a jacket blurb? That is up to you. Look to the back jacket of your favorite novels for examples. In general, try to accomplish these things:

Need a place to start? Try this:

“When <an inciting incident rocks the protagonist’s world>, <protagonist> must <overcome a series of obstacles> to <achieve the story goal>.”

Frank Daniel, a noted screenwriter and teacher, summarized the story goal as follows: “Somebody wants something badly and is having trouble getting it.”

When reading your blurb, do you get a sense of who wants what badly, and why they’re having trouble getting it?

OK, now the controversial part: My next step is to write a two-page outline.

“Outlining!?” you say. “That sounds down right un-NaNoWriMoish. I’ll bet Chris Baty is rolling over in his grave.”

To that I say: 1) Chris is very much alive, and 2) I agree. But bear with me here. While NaNoWriMo is a “fun, seat-of-your-pants approach to novel writing,” it isn’t anarchy. Not usually, anyway.

I think of it as an expedition: Four peaks in four weeks.

The map that helps you get from peak to valley to peak is your two-page outline.

Why two pages? It is long enough to convey the gist of the story, but short enough to leave plenty of room for discovery along the way.

My two-pagers usually include a sketch of the major characters and their plot threads and some specific details about what happens at the turning points in the story.

If you’ve already written your character bios, identified your key scenes, and written your jacket blurb, you’re most of the way there. Just put it in prose.

Here are some tips:

Pack for Your Expedition

November is a busy month and it goes by quickly. Here are some things you can do to make sure it goes smoothly:

That’s about it. If you follow these steps, you’ll be in excellent shape for November. The most important thing is that you spend some time understanding your story in October so you can use the precious days in November to write.

To learn more about Storyist, share tips and tricks with other users, or discuss writing-related topics, please visit the Storyist Forums.